We are one year away from the 30th Anniversary of the Gauntlet arcade machine. An enormous, throbbing beast decked out in primary colours and boasting four sets of joysticks and buttons. Playing the original arcade machine as a kid with friends was like reaching some sort of gaming nirvana as you jostled at the machine, laughing and screaming at each other as, “Yellow Wizard was about to die,” whilst, “Green Elf shot the food.”

Now in the super high-tech future, where everyone is constantly interconnected and the government have at least 8 cameras on you 24/7, you get the chance to relive those halcyon days of yore. Happily though, you don’t have to go to the trouble of leaving your house and going down to a stinking arcade full of foul-smelling teens; you can save that experience for gaming conventions instead.

New Gauntlet offers the player a hack-and-slash game that is definitely tuned to the mulitplayer experience. You can set up or drop into a lobby and play with friends or internet ‘randoms’. At this point I’d like to observe that the public games of Gauntlet I’ve played have been with some of the least-wankerish people I’ve ever met on-line. Countless times people have saved some gold for their team-mates or judged who needs life-restoring food the most before rushing in and snatching it up. I’m not sure what the deal is with that. Don’t blame me though if you end up playing with more selfish types – your mileage may vary. 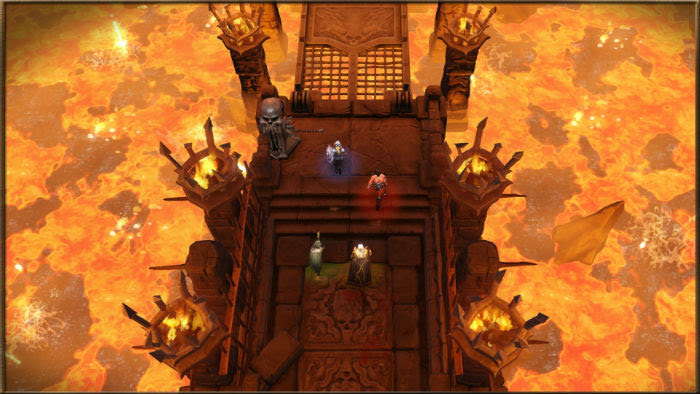 After a pretty basic intro where you’re introduced to what the Gauntlet is (some mad Wizard’s challenge) and who the characters are, you’re dropped into the game proper. You may choose from four character types; Warrior, Valkyrie, Elf and Wizard. In the original game they were all ranged characters but with greater or lesser defence, melee strength and magic. In the new Gauntlet there is actually a significantly greater distance between the characters. The Warrior has no ranged attacks and he succeeds by kiting and then going all-out into the throngs of enemies. Valkyrie has a shield which she can use to block as well as a dash, enabling her to dance through tricky situations. Questor the Elf fires a couple of kinds of arrow and drops bombs and finally, there is the Wizard.

Merlin controls very differently from how you may expect if you’re at all familiar with the Gauntlet franchise. Firstly he has 9 attacks where most of the others have 3. Secondly, you select these attacks with a Magika style spell system. Double tap X and then aim with the right stick to unleash a frost beam, whilst double Y gives you the traditional fireball. B, then X gives you  a short range but powerful magic blast and so on. With these powers the Wizard can create shields, teleport in a blaze of flame and summon icy-doom shards amongst other things. In order to stop Wizard being crazily overpowered though, the control system is very awkward to use on the fly until you get used to it. Even with practice, selecting the right spell in the heat of the action can be extremely tricky – especially when casting a fireball when you meant to teleport can mean the difference between life and death. Unfortunately, this can mean a lack of effective 4-member teams, since many players don’t want to be the Wizard.

And that’s a problem because Gauntlet is a mulitplayer experience.

The fun of combining abilities and working with/competing against your team is where all of the fun is to be found in Gauntlet. Although you can tackle the game as a single player, it’s optimised for multiplay. Grinding through the dungeons by yourself is, unfortunately, quickly boring. The game is neither pretty enough, nor characterful enough to get away with its more tedious sections as a single player game. In fact, I would say that if you don’t plan to play on-line or with friends, Gauntlet is one to avoid. Its limited tile-sets quickly become monotonous, and after grinding out some gold to unlock a few special abilities, I found that I’d have lost interest in the game long before reaching the end – and it’s not an especially long title with just a 3 sub levels for 9 main sections and 3 boss fights. Those bosses, which are exciting encounters in multiplayer with the right amount of danger and reward, are tedious grind-fests in single player. 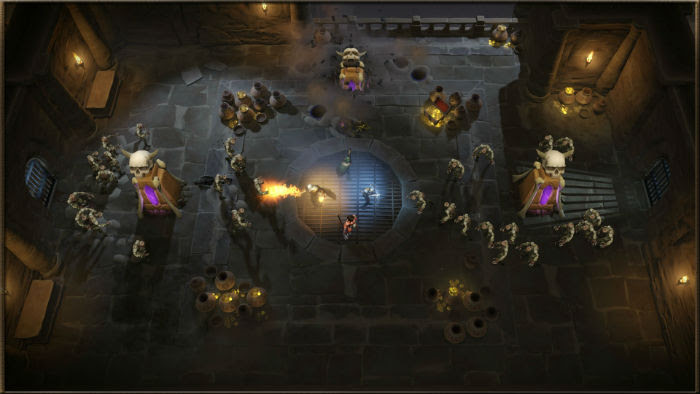 Juggling my positivity for the on-line experience with the single-player one is a difficult task. Gauntlet is a simple game should offer a simple pleasure with a pick-up and play style – but it doesn’t quite lend itself to that. In single player, the levels are too long, and your abilities too weak to really feel powerful and like you’re rampaging through your foes as you did in the original game. With the pacing feeling off and the combat and level design somewhat uninspired, Gauntlet is an underwhelming experience, even at its modest price point. However, throw 2 or 3 other characters into the mix and the game comes alive, delivering a much faster paced game where you compete – in different ways – with friend and foe alike. It’s both challenging and rewarding to go score chasing in the dungeons of Gauntlet.

As a couple of final notes, Gauntlet is designed for control pad play, although I found myself preferring mouse and keyboard for playing the Warrior at least, so it’s worth experimenting with both to see what suits you. Also, the game offers a ‘classic’ graphics mode, which just makes everything pixellated and crap looking. It lacks definition and so the game just ends up looking like a frenzy of angry smudges. Don’t bother with that – Gauntlet has always looked clean and cool. Now, if you’ll excuse me, Karlos Morale needs food… badly.